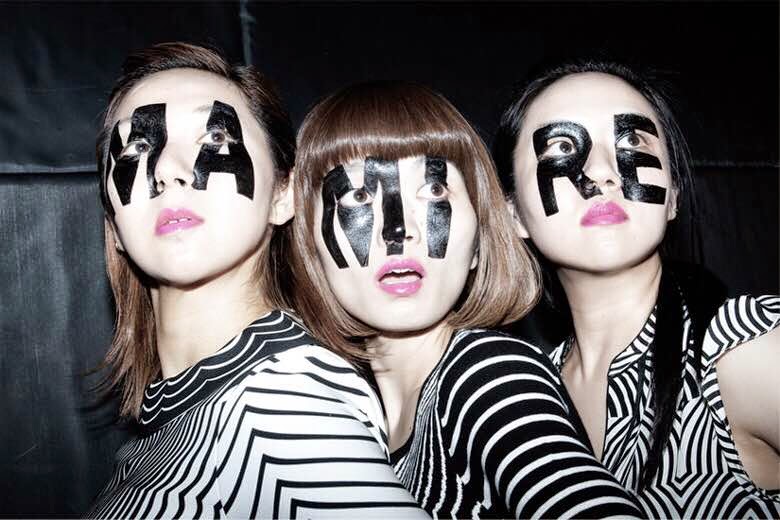 TsuShiMaMiRe mixes elements of punk, funk, hip hop, pop and even children’s songs to create their own unique and eclectic sound.  This alternative girls rock trio formed in 1998 has never seen a single lineup change and it shows with a groove that’s tight as a drum.  Full of charisma and quirk, this is a band you surely don’t want to miss.  Find the full interview and tour dates below the break.

1. Introductions:  Describe you band in ten words or less
One of the best live band of Alternative girls rock trio.

2. Favorites:  What is the one thing you can’t live without?
Mizue: Chocolate!!!

What do you have to have with you when you travel?
Mari: Soy sauce

Would you turn around and go back if you realized you forgot it?
Yayoi: Wallet! I don’t care when I forgot Bass Guitar.
When we recorded our music video,she forgot bass guitar!!!!
Mizue and I persuaded her to go back home and get her bass guitar.  She went home unwillingly.

Is there any one song or one record that made you look at your life differently?
Mari :  Velvet Underground [ Murder Mystery ]

4. Food:  What is your favorite food?
Is there anything you are excited to eat or try during your trip to the US?
Mari: I Love America Mexican foods!!! Burrito, Enchilada!!!!
Also I wanna eat American super big Pizza!
Yayoi: A Big glass of Frozen Margarita!
Mizue: Chocolate! Especially Hersey’s!
It smells like shit but it becomes a habit!

5.Past:  How did your band get together and what were you like when you first started?
We belonged to the same rock band circle of Chiba university.
And in 1999, I wanted to make a three piece girls rock band.
So I called out to Mizue and Yayoi at a cheap bar.
At first, most important thing is girls talk about our boyfriends.
It’s not so important to practice of TsuShiMaMiRe!!!
But we were sure that our groove is super awesome.
We are super happy when we spend same time!
We are best friends.

7. Present:  How has your band changed or evolved from the beginning?
Most important thing is to make a great song what nobody can do.
And we wanna show TsuShiMaMiRe’s music to all over the world.
We are in the same boat! Now we are almost family!

8.Future:  What are your plans and hopes for the future?
Keep on rocking until 80 years old!

9. Survivor:  If you were going to be dropped on a desert island and could only bring one book, one movie and one music album with you, what would you bring?
Mari: The Little Prince (LE PETIT PRINCE) by Saint-Exupéry
Mizue: CHAGE & ASKA (Japanese famous pop musician)
Yayoi: Pictorial book of flora
She want to check which plants are good to eat to survive on a desert island.

10. Last words:  Why should we come see your band?
What message would you like to give to your current and potential fans?’
Mari: I’m sure that our energy will make you happy and crazy!
Mizue: Definitely you are lucky because you can see the no.1 Alternative girls rock trio in the world!!!
Yayoi: Let’s dance!!!Let’s hang out!

Special thanks to Mari, Yayoi and Mizue of TsuShiMaMiRe and Audrey Kimura of Benten.

The tour line-up is out! With 9 stops across the US there’s a location near you! The 2015 tour kicks off in Austin, Texas as a part of the annual SXSW event. They’ve got a fantastic line-up this year, showcasing a variety of styles and sounds.You won’t get a show like this outside of Japan anywhere else! Check out their website for more details and to grab your tickets!
Japan Nite Showcase Set To Celebrate 20 Years At SXSW2015

This year marks the 20th anniversary of Japan Nite, an annual showcase bringing artists from all corners of Japan to Austin. It has been a SXSW fixture since 1996, and has featured big-name Japanese acts such as Bonnie Pink, The Pillows and Chatmonchy along with dozens of artists hailing from across many genres.

To celebrate two decades at SXSW, moumoon, The fin., QUORUM, TsuShiMaMiRe, Pirates Canoe, Samurai Dynamites and Mahoshojo-ni-naritai will perform at the Friday, March 20 show. And it will take place at Elysium (705 Red River) – home to every Japan Nite since its inception.

The J-Pop duo of composer Kousuke Masaki and singer Yuka formed moumoon in 2005, and in only a few years the pair’s melodic pop sounds became a staple on Japanese music charts. They’ve performed at Japan’s biggest summer music festival (ROCK IN JAPAN FES.) and have played in several countries outside of their native nation, including in France at the Japan Expo last summer. Their Japan Nite show, though, will be their first American performance, making this 20th anniversary show all the more special.

A couple of acts will be returning to Elysium to celebrate the special occasion. All-girl rock trio TsuShiMaMiRe first played Japan Nite in 2004, and their driving and unpredictable songs won rave reviews. They returned in 2006, and will tick off their third trip to Austin this March, months after releasing their first best-of album, Mamire. Kyoto’s Pirates Canoe, meanwhile, will make their sophomore stop at SXSW after a successful 2013 at the showcase, where their folk songs…dipping into American and Irish roots music…surprised but impressed fans.

Even though 2015 marks an important milestone for Japan Nite, the emphasis remains on introducing new groups to American fans. Kobe quartet The fin. is a rising outfit merging rock with electronic music, the band citing American “chillwave” acts such as Toro Y Moi and Washed Out  as influences (and being compared to French electro-pop group M83 by Japan-based media).  The musicians making up Tokyo outfit QUORUM boast an average age of 22, but their brand of guitar rock evokes classic rock legends such as Jimi Hendrix and Led Zeppelin. Canadian heavy metal band Anvil invited QUORUM to open for them on a recent Japan tour, if you are looking for further testimonials to their live prowess.

Mahoshojo-ni-naritai just released their debut mini-album this past January, but their high-energy live show (featuring unique visuals courtesy of the group’s resident VJ) has been drawing attention over the last year and has scored them lots of gigs, including a slot at last year’s ROCK IN JAPAN FES. Rounding out the 20th Anniversary line up is Samurai Dynamites, a punk-rock inspired troupe who have adopted rhythms and melodies unique to Japanese music, which they dub “Asianica Nippon.”

Following the 20th anniversary show, Japan Nite will set out on a tour of the United States, featuring TsuShiMaMiRe, QUORUM and The fin. on every date of eight-city tour, starting in Chicago on March 22. Japanese rock outfits Zarigani$ and BO-PEEP will join for the first four dates, while Samurai Dynamites tag along for the first trio of shows. Wonky Saitama group mothercoat will offer support at the March 27 show in Denver. Check the Japan Nite site for more info.