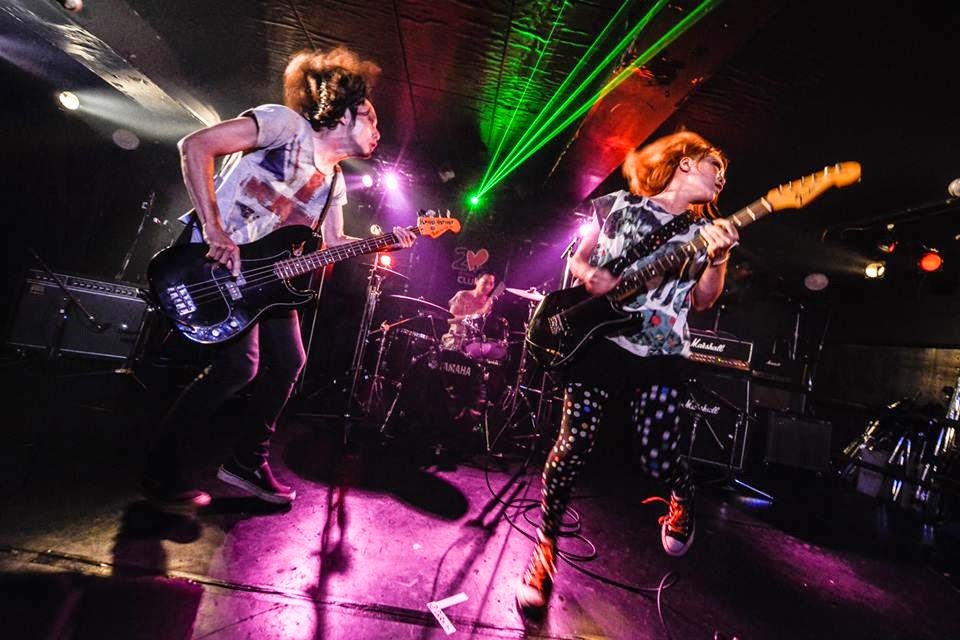 Don’t let the cutesy name fool you, these girls are 100% rock and roll.  Formed in Fukuoka and now based in Tokyo, the trio keep it simple with just one guitar, bass and drums.  God, I miss grunge music and these girls give me just what I need as they hammer out powerful Ramones-style grunge riffs reminiscent of all the dirty rock of the 80’s and 90’s I used to love.  BO-PEEP are no strangers to these shores, making their debut in the US in 2009 and earning rave reviews for their previous SXSW appearances.  They will be appearing at several stops on the Japan Nite tour, so if you can’t make it to SXSW this year, make sure to check the dates below for a show near you.  Find our full interview with BO-PEEP below the break.
Artist Name: BO-PEEP

2. Favorites:  What is the one thing you can’t live without?

What do you have to have with you when you travel?  (旅行の際、絶対持って行くもの）

What would you turn around and go back for if you realized you forgot it?（忘れたと気づいたら、取りに戻るもの）

3. Influences:  What are your major musical influences?  (音楽でもっとも影響受けたのは？）

Is there any one song or one record that made you look at your life differently? （人生を変えた曲は？）

Is there anything you are excited to eat or try during your trip to the US?（アメリカで好きなもの？食べてみたいもの？）

☆Hamburger(Please tell me the recommended food!)

5.Past:  How did your band get together and what were you like when you first started?(過去：結成のきっかけ。始めた当初はどんな感じだったか？）

☆Mika and Ryoko played since a junior college student together.  We formed a band many times.  It broke up because those bands didn’t go well.  It is BO-PEEP that was formed in the fourth.  When I started it was more pop.

7. Present:  How has your band changed or evolved from the beginning? （現在：どうかわってきたか？）

☆We became hard and tough band.

8.Future:  What are your plans and hopes for the future? （未来：計画とか夢）

☆We want a long-term tour abroad. And We want to play in the big stage of the big music festival.

9. Survivor:  If you were going to be dropped on a desert island and could only bring one book, one movie and one music album with you, what would you bring?

10. Last words:  Why should we come see your band?  What message would you like to give to your current and potential fans?’

☆ I’ll do the best live performance!!I want everyone to see hooot and cooool live of BO-PEEP!!

I’m sure you will be in our captive.Let’s enjoy dancing and screaming and drinking together!

Special thanks to Mika of BO-PEEP and Audrey Kimura of Benten.