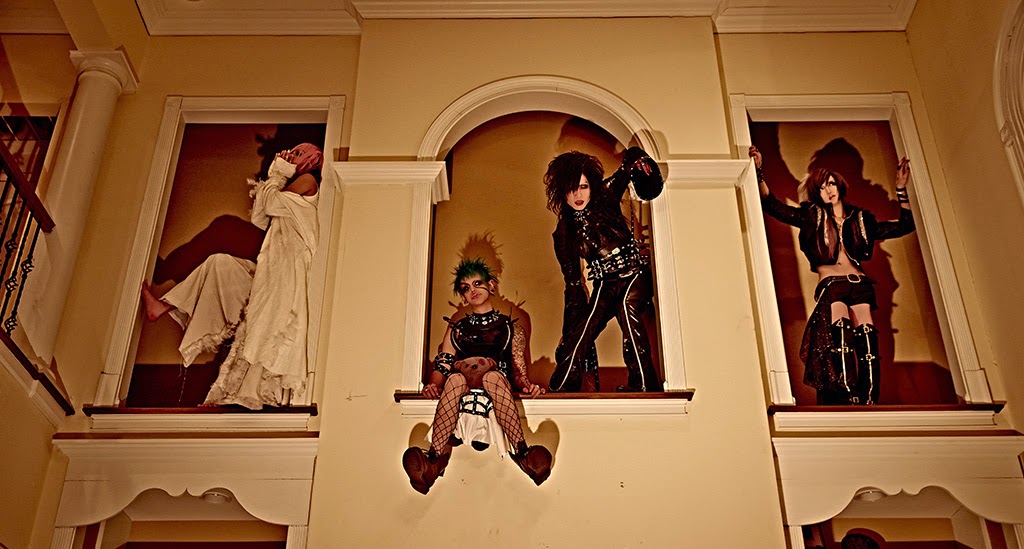 The Band:  Mejibray is a four piece loud rock band started by vocalist, Tsuzuku that includes his former VanessA bandmate, Koichi, on bass, the young and uber-talented MiA on guitar and the eccentric Meto on drums.  Probably most known for their wild theatrics and skin-bearing costumes, Mejibray features screeching vocals, heavy metal hooks and high-powered solos backed by heavily emotive lyrics that touch on everything from sex to mental illness.  They have released one full length album, two mini’s and a whole slew of singles and will be releasing their single compilation, titled SM, on 5/7. 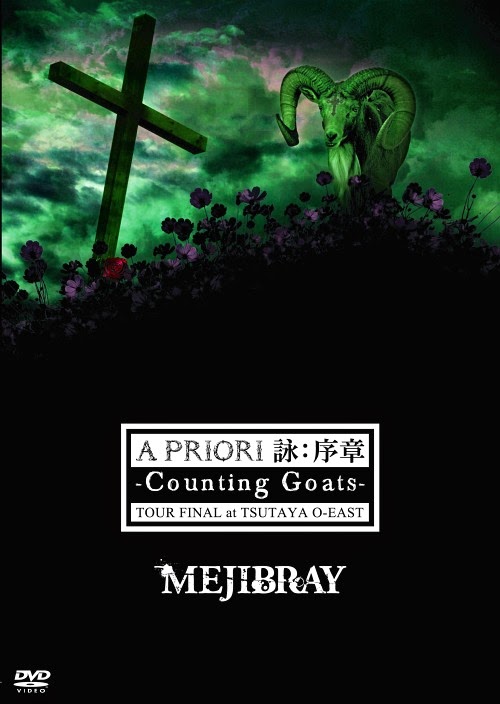 The Packaging:  Again, the packaging is pretty simple.  The cover bears the band logo and DVD title, along with the image of a goat and a cross atop a flower-covered hill.  Inside are two discs marked 「S」 and 「M」 along with the band’s definition of each:

The Show:  The first comment that came to mind after watching this show was “more costume changes than Cher.”  This show comes off the back of the triple-consecutive release (and my wallet is still sore) of their singles, A Priori, Shuuei, and DECADENCE Counting Goats 「if I can’t be yours」 and each look gets a feature, starting with A Priori. Tsuzuku releases his signature screech from a web of laser beams and the stage erupts with noise and light.  They move seamlessly into the crunch of CRAZED BRAIN and the pop hooks of VIOLET.  Koichi’s thumping bass lines really take point on this one as he proudly prances around his little corner of the stage.  They keep the energy high with DIE KUSSE, [worms] and insomnia before the band disappears and Meto exits by wheelchair for their first costume change of the night.

Tsuzuku reappears first in the Shuuei, look, scampering out to give flamboyant, manic MC and is rejoined by the rest of the band for XV, one of my favorite performances of the show for the pure weirdness of it.  Tsuzuku shaking his head and growling like something possessed, then marching up and down the stage in the manner of a wind-up monkey.  An emotional performance of 嫉妬 leads into Tsuzuku’s vocal solo,  -「       」- which saw me holding my breath as a voice near tears drifted from the dark stage.  The band rejoins him as they melt into 躁と鬱と境界.  This is really MiA’s time to shine as he delivers both technically impressive and emotional guitar work that strikes right at the heart.

Next, costume change (told you there were a lot of these) and DECADENCE -Counting Goats..if I can’t be yours-.  This section of the show also sees old favorites like サバト and Black baccarat.  Audience participation in high as the energy builds back up.  Furi and headbanging to the max as the members prance up and down the stage in time to the stampeding crowd.  They finish strong with メサイア and Meto is once again wheeled off the stage after the others exit, this time perched backward in the chair with a crazy grin.

And now we move to disc 2 which starts off with the tour documentary.  The typical fare of live clips peppered with the band being silly and generally adorable, the whole thing running about thirty minutes.  Back to the main show and the band reappears in casual dress, except for Meto who remains in his bear costume, for メランコリア .  This is the point in the show where I start noticing weird things like how Tsuzuku’s lipstick is no match for his microphone and ends up all over his face half way through the first song.   Another MC and audience photo in which MiA insists on bringing not one but FOUR guitars and is teased a bit by Tsuzuku.  Then it’s back in action with トロシナ and Meto finally comes out from behind the drums to play with the audience.  The show ends with long-time favorite, カルマ-瓦礫のマンティコーラース- and the band exits triumphant.

Overall, I find this show a bit…strange. The performances are strong and passionate, but all the costume changes are a bit silly and, frankly, kind of hurt the momentum of the show. The placement of the documentary in the middle of the show is also a strange choice. If you are a fan of Mejibray, you are probably aware that Tsuzuku was going through a rough time at the filming of this show and you can see it on him which, at times, can be a bit hard to watch. But, this is a show definitely worth having in your collection and sure to bring loads of enjoyment.