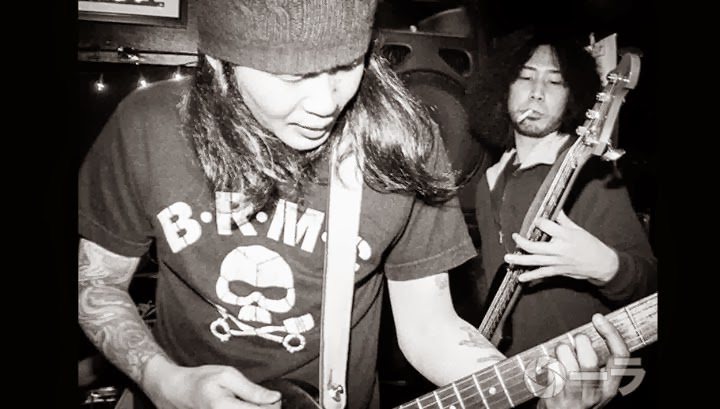 The Mootekkis, an east-meets-west Tokyo-based 5-piece rock’n’roll band, were formed midway through 2008 and were featured on the front cover of Japanzine after winning the magazine’s nation-wide battle of the bands. They went on to get airplay on InterFM 76.1 one of Tokyo’s biggest radio stations and due to their no-holds-barred, beer-fuelled rock’n’roll they have also been targeted by local drum’n’bass DJ’s for remixes.

In August 2012 they embarked on a 10 day tour of New York where they played Manhattan hot spots Bowery Electric and Piano’s as well as New Haven’s Elm Bar and a handful of basement and loft parties in Brooklyn. Earlier in the year they took the stage at Metropolis Magazine’s “Saiko” event alongside internationally traveled Japanese bands – Tokyo Pinsalocks and Moja – and there’s no sign of them slowing down.

Brooklyn’s Ishmael Osekre, organizer of the festival Aputumpu and front man of Osekre and the Lucky Bastards, had this to say after seeing the The Mootekkis at a Bushwick loft party: “This was pure rock’n’roll in a way that most people around here haven’t seen for a long time…it was just amazing.”

What’s next for these five brothers from different mothers? What isn’t next?

Meet the members and read the interview after the break!

END_OF_DOCUMENT_TOKEN_TO_BE_REPLACED

Review: The Mootekkis ‘Heckling The Dawn’

The Mootekkis are one of those bands which I wish I had the chance to see live. Living every bit the rocker lifestyle, they pour everything into their music wanting nothing more then for you to hear it. Their debut album ‘Heckling The Dawn‘ proof of this devotion, made possible by the support of their fans. I was lucky enough to get myself a physical copy of this fantastic 10 track release.