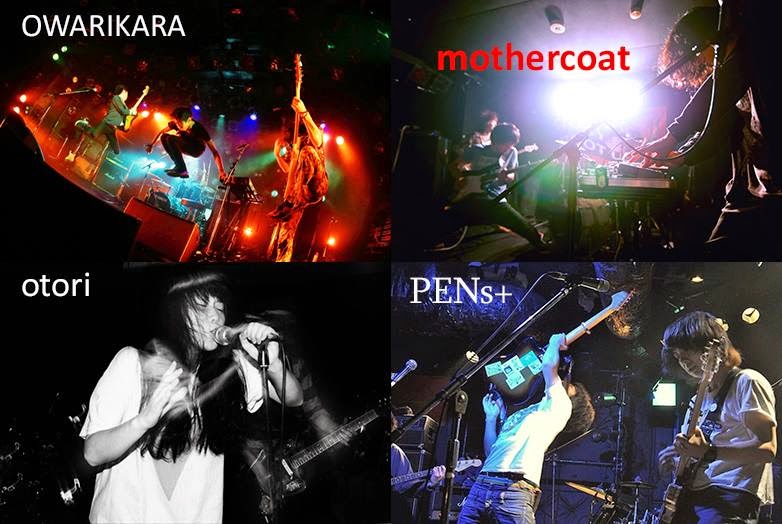 So, looks like no stop at The Rivoli this year, but that may not be a bad thing. First stop of the tour will be launching from Soybomb, a place far better described by Steve himself, than my words could try imitate. Details below. We’ll let you know as soon as ticket sales open!
Bands: otori / PENs+ / mothercoat / OWARIKARA
@ Soybomb Hq Friday, June 12, 2015
doors open: 8:00pm
show starts: 9:00pm
tickets: $10 (advance) $15 (at door)
Will post info on how to get advance tickets soon.
A DIY underground tour needs a DIY underground venue. And if you’ve never heard of Soybomb it’s because the people who run it and the locals that frequent it don’t need outsiders ruining a good thing.
I’ve brought over a lot of great underground bands from Japan like 百蚊 (hyacca), NATSUMEN, Praha Depart that were slept on by the very people in Toronto who would have enjoyed them the most. So instead of trying to make them come to us I’m invading their f*cking territory.
On June 12, 2015 Next Music from Tokyo vol 7 kicks off it’s Canadian tour at Soybomb. It’s basically a 2nd floor loft with an indoor mini halfpipe converted into a secret hangout for noise/punk/hardcore shows. The vibe at these shows is like hosting a bunch of your favorite bands to play in your living room. The bands perform on the flat of the halfpipe at eye-to-eye level with the audience so sightlines are piss poor unless the band’s immediately in front of you or you’re sitting atop the ends of the ramp. The room is crusty, anarchic and smells like an armpit. There are bikes hanging upside down from the ceiling and if you touch them you’ll get your ass kicked. Sound sketchy? Well that’s the whole beauty of it. Soybomb will initially take you out of your comfort zone but as long as you don’t act like a dick the people are nice and the atmosphere is unbeatable for watching shows.
Now I wouldn’t host a show at Soybomb unless I had the bands to suit it.
otori were made to perform at Soybomb.
otori play a furious blend of noise/HC, no-wave and krautrock with passionately screamed female vocals. The music takes the repetitive drive of Krautrock flashing in alien-like guitar toneswith complex drumlines and the anything goes, experimental nature of no-wave and spruces it up further with the larger than life,demonic intensity of Kobara Sae’s growled vocals and sinister stage presence.
PENs+ play mathy, emo-HC with pop sensibility and insane guitar wizardry. Think Algernon Cadwallader but faster and with much stronger musical chops.
OWARIKARA play loud, fast and soulful psychedelic rock and have more stage presence than 99.9% of bands on the planet.
mothercoat are a band that are too weird even for Japan. If the members of Radiohead were born in Tokyo and were even more progressive with a stranger sense of humor then you’d end up with mothercoat. Oh and the drummer is absolutely phenomenal. Watching him alone is worth the price of admission.
If Soybomb sounds too scary for you then we have another show with the same awesome bands the following night at Lee’s Palace. We sold out Lee’s Palace last year and it was one of the best shows in the history of NMFT but the intimate and chaotic nature of Soybomb may allow us to even one-up that historic night.
So if you’re feeling adventurous come enjoy a sweaty, turbulent night of music and general mayhem at the infamous Soybomb on Friday June 12, 2015.